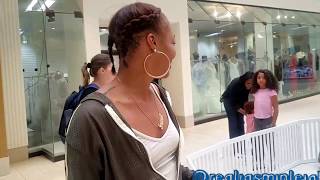 I WENT TO MY FIRST KINGS GAME

i work in the LA LIVE Center in Downtown in LA and this past Sunday i learned first hand what the perks of being a cool ass server are. Ive been serving since 2006 and I love it, from the fast money and crazy coworkers to meeting people from all over the world. Im a comedian and love storytelling, nothing makes me happier than hearing someones life time experieces.

Being so outgoing has definetly gotten me into trouble in the past but sometimes it actually comes in handy Sunday afternoon was one of those days...

happening around me but i swore it wouldnt ruin my day. i made it to work with a smile and at about 5:45pm it got even better. One of the regulars, Ross that frequents my job offered me tickets to the very popular LA Kings.

I had never watched hockey a day in my life, besides The 20 Mighty Ducks Movies but of course I was overly excited.

Our seats were right outside of the rink, hella close to that plastic thing that protects us from the players,can't think of the name, and the energy was on a million. As soon as we got settled in the first fight broke out and i was up on my feet cheering it on ,they looked like little kids on the school yard jumping around with thier fists in the air puffing out their chests. I still wonder if they plan out hockey fights like in wrestling........... I wanted to play Hockey once because of a Disney movie but i never made it to the ice skates. Im way too clusmy for that sport....as if Im not too clumsy for all sports.

I had over priced beer and suprisgingly cheap whisky so i was feeling myself and the hockey game, yelling right along with everyone else.

At the end of the game the Kings walked away with a victory and I walked away tipsy and smiling realizing how my day started and how it was now ending. Having a Positive Mental Attitude and faith in God will def make your day better trust me Im a Chef!!!!

until next time Ya Fee!!!